Time is Flying By Quickly 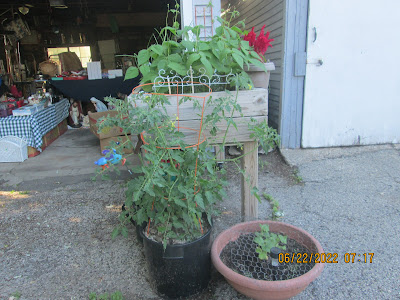 Hi there everyone, hope you are having a wonderful 4th of July with family and friends!! Mine is quiet, very quiet. It will be a year tomorrow (July 5th) that I took JP to the Assisted Living. 20 days later he died.... lots of memories this month, hope I can make it through without crashing

So, the last couple of weeks, I have been busy with a Rummage/garage sale. Sales were slow on Thursdays, so I cut that day out. Friday seems to be a busy day and Saturday not so much. Course maybe July 4th had something to do with it. But in the 5 days $172.85 was sold.... not bad. I am going to do 4 more days this month, a Friday, Saturday weekend and then the following week. I have an extra bill this month so hopefully enough stuff will be sold to pay that bill.

In the top picture I wanted to mention my little garden...just noticed today that the bean plants are starting to make little beans...gosh I can hardly wait. I will have beans, tomatoes, onions, radish, basil, dill and cucumbers. I meant to plant some flower seeds, but time got away from me. I did plant some marigold seeds and have transplanted them to other places. Going to put some in planters on the front porch. 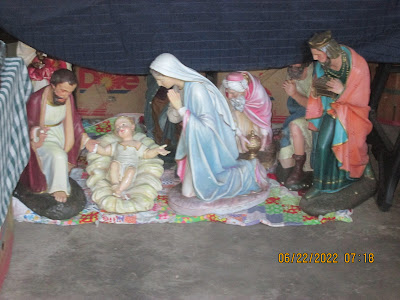 So here are some pictures of some of the stuff in the sale. I hope this manger scene sells, because I sure don't want to pack it up again. I brought a lot of stuff out from the house, plus I still had stuff in the garage to sell boxed up from several rummage sales before. I need to really sift through all this stuff and down-size a whole lot. As I may have to move in the next year or so. Will be hard to leave because we've been here 31 years this month. 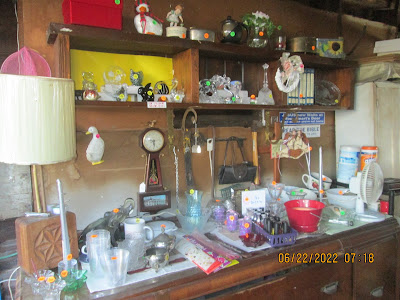 I still have lots of stuff in the basement to go through. I think some of this stuff, I will just go through and take to the thrift store or just throw out. Will see how radical I get. 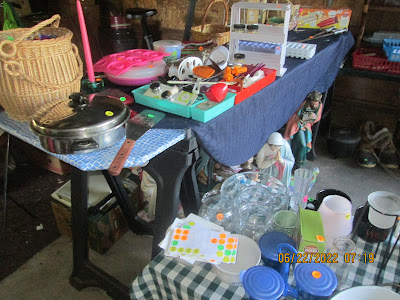 In the picture below is a card I made for the nephew, he is a golfer and fisherman and only 10 years old. Did you see the saying...."Always golf with extra socks in case you get a Hole-in-one!!! I thought that was pretty funny!! 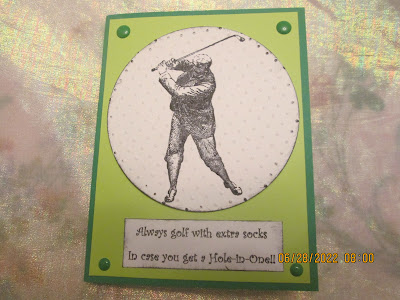 So here is my first rose of Summer.....so pretty. 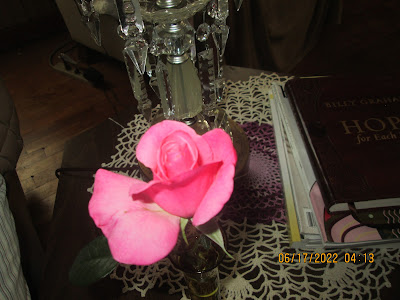 And, my peonies were in full bloom this spring, wish they lasted longer than they do. I did cut a lot of flowers and put them in vases and brought them in the house or left them on the front porch. 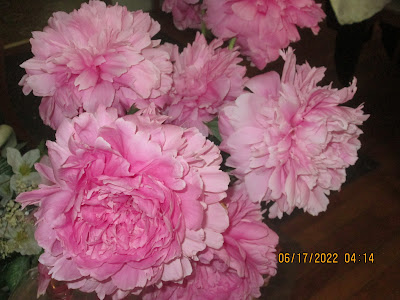 More peoni pictures. I actually inherited these flowers from a neighbor. They no longer wanted them in their backyard, and I said, I will take them and so they landed in my yard!!! 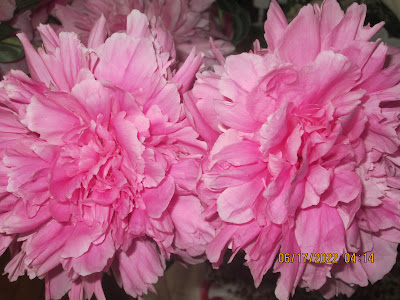 I did another radical thing this past month. June 9th, I called Spectrum and asked to cut the cable because I could no longer afford their prices for TV. So now I just have internet and landline. I bought a Roku and installed that on my TV. I am really liking it, lots and lots of movies. I don't get ABC, CBS, NBC, or FOX or my NASCAR....to get that all I would have to spend $70 a month. now that would completely defeat the purpose of saving some money. For now, I will settle with Roku and when I have extra $$$ to spend maybe I will get my channels back (which are supposed to be free, but aren't)

Well, time to close, I need to get some bills paid and dishes done today. It's only 1:30pm so I guess I have time yet. But time does fly by quickly, don't keep your eyes closed to long, you might miss something spectacular!!! Cheers ~ Louise

Posted by cards4ubylouise and other treasures at 11:31 AM

Hi Louise, I think of you.. Just mentioned your card making to my daughter. She's been selling things over line , tossing and donating, because she is moving to Seattle soon. I will watch her cat till she finally gets there and finds a place of her own to live. At first she will be staying with her son and his family for a couple months.
I know you must miss your husband. After so many years, you will miss your home too. I moved back to town after Ted passed. Not so happy here but had to get moved from the farm ...too much work and up keep there. I am wishing you the very best. Blessings, xoxo, Susie

Hope the rest of your garage sales go well - wish I lived closer otherwise I'd come and help!

cards4ubylouise and other treasures said...

Hi Susie, glad you stopped by. Life sure can change when the husband dies. Never thought I would be in this place this time of my life...not fun. The thought of packing and leaving this place, I just don't want to think about. Yeah, I am finding that out now, a lot of work to keep up with one person missing. I guess, this too will pass, just need to strength to get through it.

cards4ubylouise and other treasures said...

Hi Biz, thanks for stopping by, yes, thank you, have a lot more to go through, this week I need to go through stuff in the sale and take it to the thrift store, or put the stuff in a free box. Stuff will move fast then. Thanks for the hugs.

cards4ubylouise and other treasures
Born 75 years ago in Chicago, Illinois. We moved to Wisconsin in 1976. We settled on 20 acres, living in a pole shed, tending cows, chickens, ducks, rabbits, dogs and cats and a big garden. We left that way of life, coming back to city living. My ♥ still yearns for that simple life. We've been in Wisconsin 44 years and living in Appleton 33 years. We probably will be here till the return of Jesus and or when we die and meet Jesus face to face! Either way we win! My life has always been busy, always something on the back burner cooking. I am retired now and the SS check comes in handy paying bills and mortgage once a month. Still looking for that time that I can relax a bit...(please let me dream....okay?) I like making greeting cards, gardening, cooking (not in that order) and taking care of my little house. You can find me on the computer a lot....which can be a bad habit at times. Oh and Hockey is my game. I love the Chicago Blackhawks and follow them pretty regularly. Let's Go Hawks! Well, you have a great day, enjoy the life God has given you, draw closer to Him as you travel this journey of life. Keep looking up, better days are coming. Cheers ~ Louise